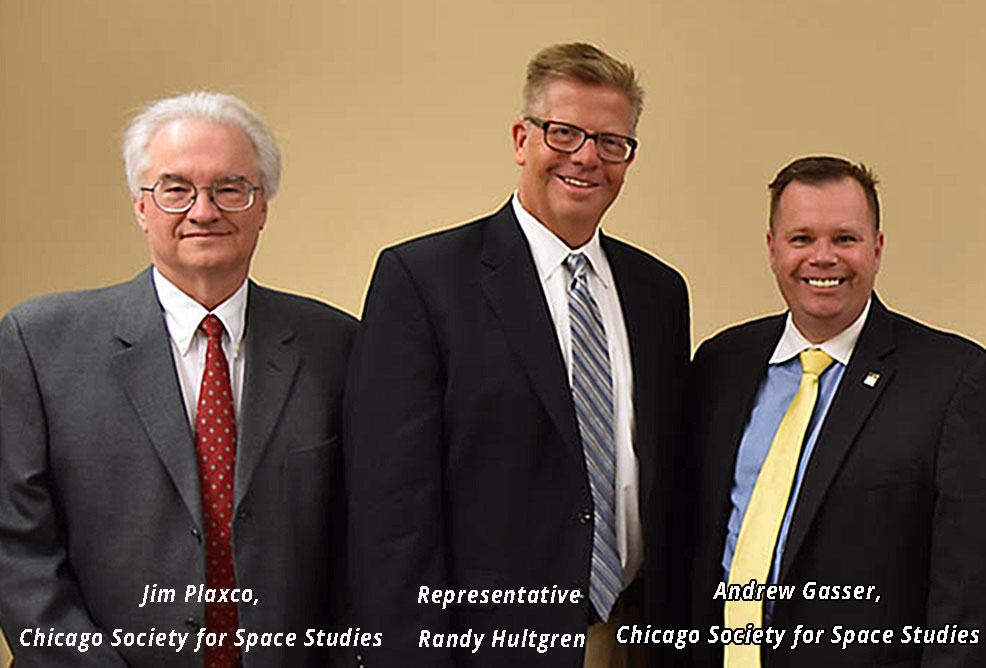 In July, Chicago Society for Space Studies issued a call for volunteers to participate in the Alliance for Space Development’s
2016 August Home District Blitz. Information about that call is at Illinois Representatives Space Policy Blitz. Following is an overview of our results to date.

What You Can Do Right Now To Make A Difference

While the August space policy blitz may be over, your ongoing support of our initiatives is really needed. How? By contacting your representative and U.S. Senators and informing them 1) of your support for the Space Exploration, Development, and Settlement Act of 2016 (H.R. 4752) and 2) of the need to introduce legislation that will insure a seamless transition from ISS to commercial space station operations in LEO.

Our most fruitful meeting on the House side of The Hill was with Representative Randy Hultgren (R) of the 14th Congressional District and a member of the House Committee on Science, Space and Technology. Also attending the meeting was Nick Provenzano, Hultgren’s Senior District Representative. Meeting with Hultgren and Provenzano and representing the space activist movement were CSSS President Jim Plaxco, Andrew Gasser, and Amador Salinas. This meeting was arranged by Andrew Gasser.

In a prepared presentation, our team explained who we are and the importance of the SEDS Act and the creation of a gapless transition from ISS to commercial space stations in LEO. While the Congressman was most receptive, asked a number of questions, and agreed with us on numerous points, we were unable to secure from him a commitment to either piece of legislation. On the positive side, the Congressman did meet with us for over 45 minutes which is itself a very positive indicator of interest.

We also met a week later with Maria Manzo, Senior Outreach Coordinator for Representative Bill Foster (D) of the 11th Congressional District. Representative Foster is also a member of the House Committee on Science, Space and Technology. This meeting was arranged by Amador Salinas. Our team for this meeting was Jim Plaxco and Amador Salinas. Significantly, Amador had met with a Foster staffer as part of the March Storm 5 months ago. At that time, Amador was told that they would “think about it”. At the conclusion of our presentation we did raise this point. Unfortunately Ms. Manzo was unable to comment at that time with respect to that prior meeting and could make no commitment one way or another with respect to our requests for support.

Tammy Duckworth (D) representing the 8th Congressional District was contacted but she refused to meet with us.

Peter Dicianni, the Republican candidate in the 8th Congressional District race was contacted but our contacts went unacknowledged.

Both of Illinois incumbent senators were contacted as were the Democratic and Libertarian party candidates for the U.S. Senate.

Our most fruitful meeting was with Libertarian candidate for the U.S. Senate Kent McMillen. In a one-on-one meeting with CSSS President Jim Plaxco which lasted for more than an hour, Mr. McMillen did agree that if he is elected to the U.S. Senate that he would be willing to become a Senate sponsor for a Senate version of both the SEDS Act and the Gapless Transition Act.

We contacted incumbent Senator Richard Durbin’s (D) office and did receive a response from Chris Homan, Senator Durbin’s Senior Advisor on Foreign Policy and National Security. Jim Plaxco explained our desire that Senator Durbin become a sponsor in the U.S. Senate of a Senate version of both the SEDS Act and a Gapless Transition Act. This was followed by a discussion as to why and how these items will benefit the United States. Mr. Homan was receptive and supportive of the points raised with respect to the Gapless Transition. We are on the list for a possible meeting at Senator Durbin’s office but do not know if it will happen nor who the meeting will be with.

While we were not able to arrange a meeting with the staff of incumbent Senator Mark Kirk (R), CSSS member and blitz participant Amador Salinas was able to speak with Robert Johnson, Senator Kirk’s Director of Community Affairs.

Tammy Duckworth (D) who is a candidate for U.S. Senate was contacted but refused to meet with us.

About the SEDS Act and ISS Gapless Transition

The two key issues raised at all meetings were a solicitation of support for the Space Exploration, Development, and Settlement Act of 2016 (aka SEDS Act, H.R. 4752) and for the introduction of ISS Gapless Transition legislation.

The SEDS Act was introduced by Representative Dana Rohrabacher (R-CA) for the purpose of declaring space settlement as being a long-term space policy goal for NASA and the United States. The benefit will be an acceleration of space-related economic development, infrastructure development, and the utilization of space resources for the benefit of humankind.

The Space Exploration, Development and Settlement Act (SEDS) bill would amend the law governing the activities of NASA, known as the NASA Act of 1958, to include this statement:

Exploration, Development and Settlement of Space.
The Congress declares that expanding permanent human presence beyond low-Earth orbit in a way that enables human settlement and a thriving space economy will enhance the general welfare of the United States and requires the Administration to encourage and support the development of permanent space settlements.

While the White House and NASA have announced that there will be a transition to commercially owned and operated space stations after ISS’ mission ends in 2024, NASA has not made plans on how this transition will be managed. Without a well defined plan in place well in advance of the ISS end-of-mission, the U.S. runs the risk of disrupting ongoing space-based research while simultaneously hindering U.S. businesses ability to identify space market opportunities. The arena of advanced technology and research is highly competitive and one in which the U.S. currently excels. Lack of good planning will put our lead in those areas that rely on space R&D at risk.

The proposed ISS Gapless Transition legislation, which is supported by the Chicago Society for Space Studies, will do much to insure that our space-based scientific research and commercial development continues without disruption.