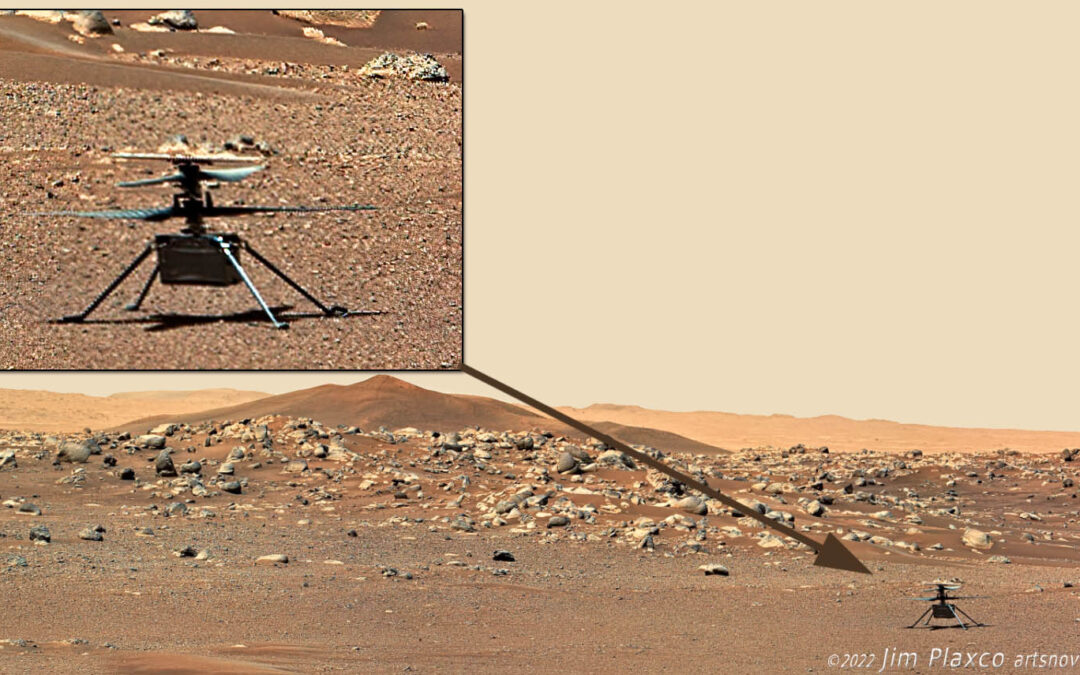 On June 11, 2022 the Mars helicopter, Ingenuity, finished its 29th flight, surpassing its preplanned 5 flights. At 15 months, Ingenuity is well beyond its original one month mission. NASA is preparing Ingenuity for its first winter on Mars by changing its operations to accommodate dropping temperature. The cold cycling each night is a real threat to the crafts’ electronics. This type of cycling is thought to have ended the earlier rovers Spirit and Opportunity. Since NASA never planned for Ingenuity to last this long experts are not sure that Ingenuity will last the winter. So this is a good time to look at what Ingenuity has very successfully done.

The helicopter was planned to be a test of flight on Mars. To save money, most of the vehicle was made with off the shelf equipment. Some of the parts were ordered from consumer retailers. Instead of using a customized operating system, Ingenuity uses Linux as its operating system. It has two cameras both purchased on the open market. The Sony IM 214 and the Omnivision OC 7261 can be found in many cell phones and other devices.

Ingenuity’s first flight on April 19, 2021 lasted 39 seconds. This first powered flight on an exoplanet went straight up, then landed christening the landing site as “Wright Brothers Field”. Ingenuity even had a postage size piece of cloth from the Wrights’ first airplane attached. The International Civil Aeronautics Organization, which assigns codes to earthbound airports, like MDW for Midway or ORD for O’Hara, showed world interest in Ingenuity by giving the landing field the code IGY.

In addition to fulfilling its primary mission as a technology demonstration of flight on Mars, highlights of Ingenuity’s 29 flights include:

April 30 2021: During the fourth flight, the Perseverance rover recorded audio of the helicopter. This is the first time any vehicle has been recorded off Earth.

May 7, 2021: On the fifth flight, Ingenuity landed at a new site, Airfield B. As a scout, Ingenuity must move from airfield to airfield. It is now on Airfield U.

May 23, 2021: During the sixth flight, the navigation system suffered a glitch that made Ingenuity roll and sway. The controllers would never have put this much strain on the systems. By overcoming the glitch Ingenuity showed how much it could take, thus increasing confidence in the craft.

April 19 2022: On the 26th flight, Ingenuity took pictures of Perseverance’s back shell and parachute from its landing.

Ingenuity weights about 4 pounds on Earth but only 1.5 pounds on Mars. Dimensionally, Ingenuity is just 5.4 inches by 7.7 inches by 6.4 inches, which is roughly the size of a tissue box. Ingenuity’s flight system has four carbon-fiber blades arranged into two 4-foot counter rotating rotors that spin at a 2,400 rpm. Ingenuity is packed with computers, telecommunications hardware, heaters, batteries, and sensors. Four carbon composite landing legs, each about 1.26 feet long, give the helicopter 5.1 inches of clearance above the Martian surface.

NASA’s Mars Ingenuity Helicopter is a small, autonomous craft intended to test, in a historical first, powered, controlled flight in the thin Martian atmosphere. Ingenuity’s mission was only as an experimental flight test. Even one test flight would accomplish this. As of June 11, 2022 Ingenuity had made 29 flights, both as a demonstration and as a scout for the rover. NASA now has real experience that can be applied to future aircraft designs for other planets. A mission to one of Saturn’s moons, called Dragonfly, will be a helicopter. So Ingenuity’s data can be put to use for that mission. There was no requirement to collect science data, therefore, there are no science instruments on the helicopter. Instead, the helicopter carries a combination of custom-made and money saving off-the-shelf components, including two cameras two cameras, both purchased on the open market; the Sony IM 214 and the Omnivision OC 7261 that can be found in many cell phones and other devices. Instead of writing a custom operating system, Ingenuity uses Linux as its operating system.

Communications between mission controllers on Earth and the Mars Helicopter are relayed by a number of systems. The Deep Space Network sends commands and other data from Earth directly to the rover. Perseverance’s main computer than relays the commands to the Helicopter Base Station on the rover, which then broadcasts them to the helicopter. The base station than collects transmissions from the helicopter sending data to rover and then back to Earth. The system has a data rate of up to 250 kilobytes per second over distances of up to 3,300 feet.

About the Exploration of Mars

The International 1967 Outer Space Treaty gives the United States a duty to explore space in a way that prevents the harmful contamination of other planets. NASA’s Planetary Protection Office creates cleanliness standards known as planetary protection requirements. The requirements call for missions to take precautions to limit the biological material carried by NASA robotic spacecraft that travel to Mars and other planets. Flight hardware for the Mars 2020 Perseverance mission and the Ingenuity Mars Helicopter have been built to meet NASA planetary protection requirements. NASA’s main strategy for limiting contamination of Mars is to be sure that all hardware going to the planet is biologically clean. To meet these cleanliness standards, the rover, the helicopter and other parts of the spacecraft were assembled in clean rooms. Mission hardware is also cleaned using techniques that have been used on previous missions.