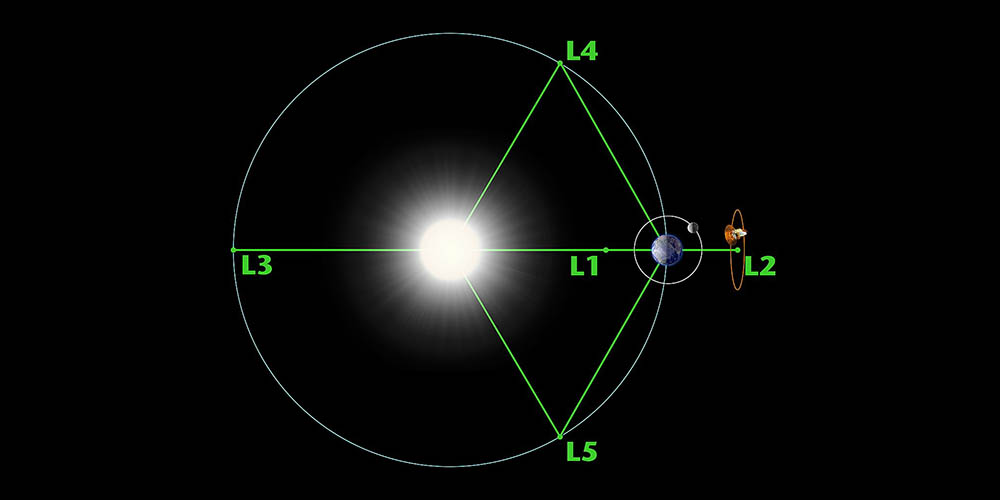 When the Chicago Society for Space Studies was started 43 years ago (then known as the Chicago Society for Space Settlement), there was much talk about using the Lagrange points for space development. Lagrange points are a family of locations in space where the tug of gravity from the Sun and the Earth balance out. Consequently, any spacecraft located at one of these points can remain in place for a long time. Lagrange 1 (L1), Lagrange 2 (L2) and Lagrange 3 (L3) are along a line contacting the two large masses: the Earth and the Sun. These three points are unstable versus the stable Lagrange 4 (L4) and Lagrange 5 (L5) points, which are the apexes of two equilateral triangles.

The L3 point, as shown in the diagram, is always opposite the Earth on the far side of the Sun. As of this time, there have been no proposed uses for the L3 point.

The L1 and L2 points have been used by various space agencies as locations at which to park scientific satellites. The L1 point offers an uninterrupted views of the Sun and Earth and has been used as a location from which to study both our star and our home planet. The L2 point is the optimal Lagrange point for satellites conducting deep space astronomical observations. L2’s proximity to Earth provides for easy communications with Earth, continuous solar array illumination by the Sun, and an unobstructed outward-view – since the Sun, Earth, and Moon are all “behind” a satellite at that location.

The most famous of the Lagrange points is L5, which was to be the location of a space colony proposed by Gerard K. O’Neill in the article The Colonization of Space which appeared in the September, 1974 issue of Physics Today. That article was a source of inspiration that led to the creation of the L5 Society, which later merged with the National Space Institute to form the National Space Society. Unfortunately, the L5 Society’s slogan L5 by ’95 was not realized.

With respect to the five Lagrange points, only two have been made use of so far – L1 and L2. The L1 point has served as home to a number of Earth and Sun observing missions:

The L2 point has been slightly more active but for science missions observing deep space. These missions include:

The James Webb Telescope will be parked at L2 when it is launched.

For additional information about the use of L1 and L2, see List of objects at Lagrangian points.