Neil deGrasse Tyson and the Delusions of Space Enthusiasts 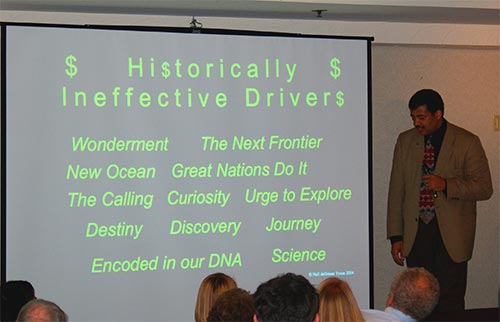 As a part of the 2006 International Space Development Conference, I had the opportunity to attend several banquets each featuring a different speaker. The Friday night dinner consisted of the usual hotel banquets fair and a faire in the person of Hayden Planetarium Director Neil deGrasse Tyson. For me the highlight of the evening was the charming former JPL employee sitting next to me at dinner. We had many common interests and spent more time talking than eating our respective meals. However, all that came to a close when Dr. Tyson rose to speak.

Tyson opened by voicing his concern about the future of science in our country. It was only after this opening statement that he revealed to the audience the title of his presentation: “Delusions of Space Enthusiasts.” He also informed us that he was concerned about giving us this talk as we “were by far the most sober dinner audience I’ve ever spoken to.” Whether he meant that literally or figuratively or both, I don’t know. I do know that in a literal sense that it was not true for the presentation that Dr Tyson gave was essentially the same one I had seen him give several years earlier as a part of a colloquium at DePaul University. And trust me, that audience was sober – literally.

Tyson opened his presentation with a series of “Visionless Quotes” related to space exploration.

For example: “Man will not fly for 50 years” made by Wilbur Wright to his brother Orville in 1901.

Another gem was from the New York Times, who seems to have a nasty habit of bad predictions and/or a lack of vision: “We hope that Professor Langley will not put his substantial greatness as a scientist in further peril by continuing to waste his time, and the money involved, in further airship experiments. Life is short, and he is capable of services to humanity incomparably greater than can be expected to result from trying to fly…” from Dec. 10, 1903.

And another wonderful prediction from Orville Wright made in 1908 that “No flying machine will ever fly from New York to Paris.”

Closer to home, University of Chicago astronomer F. R. Moulton in 1932 stated that “There is no hope for the fanciful idea of reaching the moon, because of insurmountable barriers to escaping the earth’s gravity.”

But science advances and in the August 1948 Science Digest, it was stated that “Landing and moving around on the moon offer so many serious problems for human beings that it may take science another 200 years to lick them.”

No longer impossible but still a long way off. But on the pessimistic side, in February 1957, Lee De Forest claimed that “Man will never reach the moon, regardless of all future scientific advances.”

So there we have it: a series of pessimistic predictions about what can, oops make that can’t, be done in the future. What these forecasts have in common is a lack of vision as to the advances in science, technology and engineering that were only just around the corner.

Dr. Tyson then segued into another series of quotes.

“The most ambitious United States space endeavor in the years ahead will be the campaign to land men on neighboring Mars. Most experts estimate the task can be accomplished by 1985.” from a 1966 issue of the Wall Street Journal.

And to really rub it in, a quote made in 1980 by Robert Traux: “By the year 2000, fifty thousand people will be living and working in space.”

As he approached the end of this series of quotes, Dr. Tyson asked “What’s at the bottom of this delusional state?” A wit in the audience chirped up: “NASA View Graphs” thus receiving one of the better laughs of the evening.

One thing that may be garnered from these two sets of quotations is that in the case of the former people were unduly pessimistic or lacked the vision to see the possible advances in science and technology; as opposed to the latter where the technology was there but the human willingness to commit resources to their fulfillment was lacking.

Dr. Tyson went on to make the argument that exploration and discovery had never been primary motivators of big projects. Rather, it was what I would term issues related to a nation’s or government’s degree of power or strength. To support his contention, Dr Tyson presented as examples the projects identified in the following table.

Tyson uses this slide to make the point that “defense, the promise of economic return, and the praise of power are the principal drivers for every major project ever undertaken in human culture.”

One thing that you may have noticed is that Dr. Tyson places the Apollo program within the Defense category. He justified this by referencing President Kennedy’s May 25, 1961 speech to a special session of Congress. According to Dr. Tyson, we always see the one paragraph from the speech about exploration but not the one that comes before it.

The paragraph on exploration that he is referring to is:
“First, I believe that this nation should commit itself to achieving the goal, before this decade is out, of landing a man on the Moon and returning him safely to the Earth. No single space project in this period will be more impressive to mankind, or more important for the long-range exploration of space; and none will be so difficult or expensive to accomplish. We propose to accelerate the development of the appropriate lunar space craft. We propose to develop alternate liquid and solid fuel boosters, much larger than any now being developed, until certain which is superior. We propose additional funds for other engine development and for unmanned explorations–explorations which are particularly important for one purpose which this nation will never overlook: the survival of the man who first makes this daring flight. But in a very real sense, it will not be one man going to the Moon–if we make this judgment affirmatively, it will be an entire nation. For all of us must work to put him there.”

The paragraph preceding which Dr. Tyson refers to is actually the opening paragraph:
“IF we are to win the battle that is now going on around the world between freedom and tyranny, the dramatic achievements in space which occurred in recent weeks should have made clear to us all, as did the Sputnik in 1957, the impact of this adventure on the minds of men everywhere, who are attempting to make a determination of which road they should take. Since early in my term, our efforts in space have been under review. With the advice of the Vice President, who is Chairman of the National Space Council, we have examined where we are strong and where we are not. Now it is time to take longer strides–time for a great new American enterprise–time for this nation to take a clearly leading role in space achievement, which in many ways may hold the key to our future on Earth.”

According to Dr. Tyson, this was a speech about defense, not exploration, and the date it was given was shortly after Yuri Gagarin had made his historic first human space flight.

Dr. Tyson continued with an entertaining series of “then and now” images. For example the first pair of skates vs today’s skates; the first cell phone vs today’s cell phone; the first Mercedes-Benz vs today’s Mercedes-Benz; the first Wright Flyer vs the Airbus 380, of which he said that “it looks like an anaconda that just ate a pig.” to loud laughter and general agreement.

Tyson then moved on to the first manned rocket to the Moon: the Saturn V. And for today’s rocket, a large question mark. He told the audience that we shouldn’t have to walk up to a Saturn V rocket and touch it like the monkeys touching the obelisk in the movie 2001.

Dr. Tyson’s rationale for exploring space is that “space inspires people to become scientists.” With respect to space exploration, his closing remark was “Without the economic case, kiss it all goodbye.”

The presentation was followed by a lively question and answer session. Questions ranged from the Tunguska impact to the NASA budget. One interesting story that came up was a TV interview that Tyson had recently done. He was asked by the reporter “How can you justify spending 3 billion on a trip to Saturn in these times?” Tyson said he corrected him by pointing out that first that amount was spread out over 12 years so it was really only about 300 million a year and that was actually less money than Americans spent on lip balm. This left the interviewer at a loss for words and he just turned the mike back to the other reporter. Tyson related that as he was leaving the studio that he was unaware that the interview had been piped to the exit area of the Rockefeller Plaza and that when he left he was greeted by applause and people waving their lip balm and shouting “We want to go to Saturn.” Way to go Neil!