Book Review: Beyond Earth’s Edge The Poetry of Spaceflight 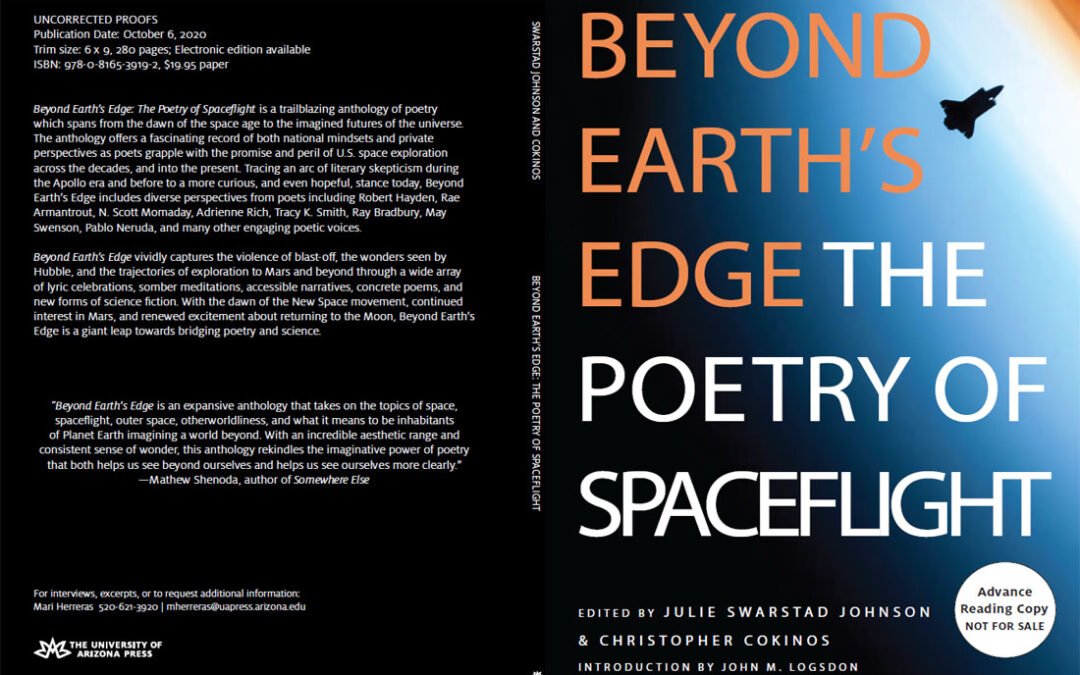 If you were to look around my office you would see that I am surrounded by book cases filled with technical books about space exploration and planetary science. You will not see any works of fiction. The same holds true for my tablet, which is filled with ebooks. While I have done book reviews in the past, they were all of non-fiction books. That makes reading and reviewing Beyond Earth’s Edge The Poetry of Spaceflight something of a novel experience for me.

It was on the insideNSS platform that I met Christopher Cokinos, one of the editors of the book Beyond Earth’s Edge The Poetry Of Spaceflight. I indicated to Chris that I was interested in reviewing his book and he agreed. I had two reasons for wanting to do this book review. First, I was very curious to see how poets had been representing spaceflight and space science, and whether or not I could find inspiration in their writings. My second reason was personal. Over the last two plus years I have been writing haiku about space exploration, space settlement, and our solar system. At this point I have written more than enough haiku to create a book – which I intend to do.

The original plan was for this review to appear on the National Space Society’s website but I discovered that fellow NSS book reviewer Emily Carney had beat me to the punch. You can read Emily’s review at Beyond Earth’s Edge Explores Spaceflight’s Poetic Spirit. Note that I do take exception to a statement made by Emily in her book review that “The result is a book that reads quite seamlessly from one poem to the next.”

My approach to reviewing this book was to evaluate each section and poem on a stand-alone basis, assigning a grade (A=4,B=3,C=2,D=1,F=0) to each poem. I have appended to this review a complete listing of the book’s table of contents which identifies each of the book’s 89 poems and authors. As presented in the book, the poems are organized into the following sections:

Each section of poems features an introduction written by the book’s editors. These introductions are the book’s strongest content. Well written and informative, they outshine the poetry the book contains. Also noteworthy is the excellent introduction written by space historian and space policy expert John Logsdon. His Exploring the Unknown: The United States in Space provides an excellent introductory overview of the birth and evolution of the space age.

In reading this book, I was hoping to find inspiration in the poems contained in the collection. I have to say that I was disappointed in this regard. One thing that struck me was an apparent dichotomy between poets and space artists. Based on the underlying message contained in many of the book’s poems, I assume that these authors are people whom I would characterize as being technological pessimists. This is in sharp contrast to those artists who create space art as they clearly embrace science and technology as represented by their positive portrayals of science and space exploration.

In reviewing the poems, I tried to maintain an open mind and not be influenced by any individual poem’s message or perspective. Instead I focused on each poem’s imagery and its effectiveness at making a statement. There were those whose premise I disagreed with but felt that the poem itself was a well crafted statement of the author’s premise. As a way of succinctly presenting a review of the book’s 89 poems, I’ve created the following table which provides a grade-based summary of the poems contained in each section of the book.

It was only in assembling this section-based grading table that the attitude of the various poets towards space exploration became clear to me. I find it both noteworthy and dismaying that the section of the book devoted to our future in space, To The Stars, With Difficulties, was the least inspirational while the section on the history of robotic exploration got the highest grades.

The best of the Sputnik And The Race To The Moon section was Ronald Duncan’s Man (Part IV, Canto 3) which, while not inspirational, was an interesting psychological profile of sorts written from an astronaut’s perspective (we’re inside his head hearing his thoughts).

I was disappointed that so many of the poems in the Apollo section appeared to be either ambivalent or somewhat negative about the human space program, which represents mankind’s greatest technological achievement. The book’s editors recognized this when in the introduction to the section they state “most poets writing in English reacted to lunar exploration with notes of hesitation if not outright disdain.” What fools these poets be.

I should not have been surprised that my favorite poem in this section was written by renowned science fiction author Ray Bradbury. While my office contains no works of science fiction, in my youth I was an SF addict and Ray Bradbury was one of my favorite authors. Bradbury’s poem Abandon in Place, written in 1982, is a lament over our apparent abandonment of the space frontier. Coincidentally, I used the term Abandon in Place back in 2009 as the title for one of my artworks which lamented the cancellation of the last three Apollo lunar missions. When used in reference to space, Abandon in Place is the phrase NASA uses to describe facilities, like launch pads, that are no longer in use and no longer maintained.

While I particularly liked the imagery used to describe the surface of Mars in Brian Turner’s Viking 1, my favorite poem in the Robotic Explorers section, and one of my favorites in the book, was Julie Swarstad Johnson’s Psalm 8. Hopefully the following lines will give you an idea of the overall tone of her poem:

Blessed, too,
those machines that go without thought of return,
the glimpses they send back of worlds
we thought we knew: the opalescent whorls
of storms churning on Jupiter, liquid pooled deep
beneath the south pole of Mars, faintest sunlight
kindling Pluto’s peaks of ice bright as sacred flame.

A favorite poem from Humans In Low Earth Orbit is Witnessing the Launch of the Shuttle Atlantis by Howard Nemerov wherein he describes a space shuttle launch. I was also very impressed with Diane Ackerman’s Elegy For Challenger and its opening line:

Wind-walkers,
how we envied you
riding a golden plume
on a glitter-mad trajectory
to watch Earth roll
her blooming hips below
and scout the shores
of still unnamed seas.

I was surprised to see a poem by famed astronaut Story Musgrave. Titled Cosmic Fireflies, the subject is the flash of light that astronauts perceive when a cosmic ray passes through their retina.

I arrived at the book’s last section To The Stars, With Difficulties with anticipation. I was anxious to learn what these poets thought of our future in space. While I did give three of the poems in this section A’s, I found nothing there that I would call inspiring or uplifting. While others will most certainly come to different conclusions, I suspect that those who feel as I do about space exploration will reach a similiar conclusion.

In conclusion, I am glad that I took the time to read this book as it offers not just different, but divergent, perspectives on the past, present, and future of space exploration. While not being the inspirational work I was looking for, it was both informative and enlightening. Kudos to Julie Swarstad Johnson and Christopher Cokinos for producing this unique book.

Beyond Earth’s Edge The Poetry of Spaceflight Table of Contents

If you purchase Beyond Earth’s Edge The Poetry of Spaceflight after registering with the AmazonSmile program, CSSS will receive a donation from the AmazonSmile Foundation for all your qualifiying purchases. Just click the AmazonSmile graphic below to get started.